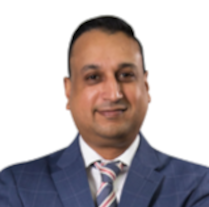 Mr. Dookeran’s last role was at the UWI-Arthur Lok Jack Global School of Business as the Programme Director of the Executive MBA. Navin obtained his MBA in Finance from the McGill University in Montreal, Quebec, and received Bachelor’s Degrees in Economics (BA) and Life Sciences (BSc.) from Queen’s University in Kingston, Ontario, Canada.

His early career began at the Development Finance Limited in Port of Spain, Trinidad and Tobago. Later, he moved to the RBC Financial Group in Toronto, Canada, where he held the portfolio of Commercial Relationship Manager. His experience in finance continued at Manulife Bank and Trust (Canada) as Director in Lending Services and then as the AVP/Head of Credit Risk Management, where he continued to deepen his experience in banking strategy, operations, service delivery and credit risk management.

Mr. Dookeran’s view is that “the EXIMBANK, the only official Export Credit Agency (ECA) in the country has a unique role to play in the financing and development of export diversification of the economy through resource allocation and risk sharing strategies.”

How can we help you?

Contact us at EXIMBANK’s office or submit a business inquiry online.